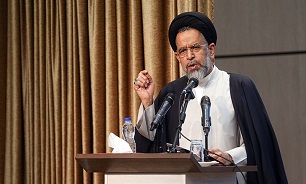 “He was strongly supported by American and Israeli intelligence services, and they considered it unlikely for Iran’s Intelligence Ministry to be able to penetrate their umbrella support and apprehend him inside the Islamic Republic of Iran through a complicated operation,” Alawi said on Sunday.

He added, “Jamshid Sharmahd and his associates planned some 27 acts of terror all of which were thwarted thanks to the perseverance, vigilance and knowledge of Iranian intelligence forces”.

“Once, when some individuals threatened in a phone call to catch him (Sharmahd), he said in response that his seat was on the sixth floor of the Federal Bureau of Investigation; he meant they were not able to arrest him,” said the minister.

Alawi added that the person who regarded himself as having a seat at the FBI is now in the hands of Iranian intelligence agents.

Iran’s Intelligence Ministry said on Saturday it had arrested Jamshid Sharmahd, adding its forces dealt a “heavy and serious blow” to Tondar (Thunder) terrorist group by nabbing the ringleader of the anti-Iran terrorist group based in the United States.