Lebanon President Strongly Rejects Hezbollah Arms Caused Beirut Mega-Blast
TEHRAN (defapress)- Lebanon's President Michel Aoun dismissed the idea that a massive explosion in Beirut port earlier this month was caused by the blast from a deposit of weapons warehoused by Hezbollah, stressing that it is "impossible".
News ID: 81817 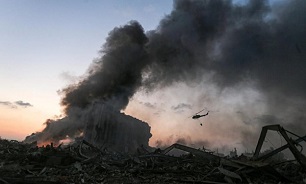 In an interview with the Italian newspaper Corriere della Sera published Tuesday, Aoun announced that Hezbollah was not storing weapons in the Beirut port, echoing remarks by chief of the resistance movement over the heart breaking incident

Yet, the head of state noted that the investigation will include all possibilities.

Speaking in a televised speech on August 7, Secretary General of Lebanon’s Hezbollah resistance movement Seyed Hassan Nasrallah dismissed as “injustice” media speculation in the early hours of the tragedy that Hezbollah had stored missiles in the port, stating that those accusations aimed to incite the Lebanese people against the resistance group.

On the same day, Aoun announced that an investigation into the Beirut port explosion was looking at whether it was the result of external interference, in addition to simple negligence or an accident.

One week later, Nasrallah put forward two possibilities, at least theoretically, regarding the deadly blast, saying it occurred either out of negligence or sabotage.

“If investigations proved that the explosion occurred out of negligence, those responsible must be held accountable and punished,” the Hezbollah chief stated, stressing that if it turned out that Israel was behind the blast, it would pay the price.

Following the blast at Beirut port on August 4, terrifying footage showed a huge mushroom cloud of fire and smoke covering much of Beirut’s port area, blowing out windows and destroying buildings in the neighborhood, as a warehouse at the Beirut docks caught fire on Tuesday afternoon. Photos on social media showed many buildings in the area damaged or destroyed, leaving residents covered in glass and blood.

Several smaller explosions were heard before the bigger one occurred and turned the city’s streets into a debris-strewn wasteland.

The blast, which was caused by some 2,750 tons of ammonium nitrate, has killed at least 171 people and sent 6,000 to the hospital with various injuries from the devastating shockwave. The explosion left 300,000 homeless, as vast part of the city has been fallen into ruin. It left a 43-meter deep crater at the site and devastated nearly half the buildings in the city.

Health Minister Hamad Hassan blamed the explosion on a fireworks accident, ordering all hospitals in Beirut to prepare for the victims of the incident.

Lebanese General Security Director Abbas Ibrahim has also dismissed rumors of Israeli involvement, noting that a large cache of highly explosive ammonium nitrate was stored at the site, after being confiscated off a ship several months ago. He did not explain how the fire has started.