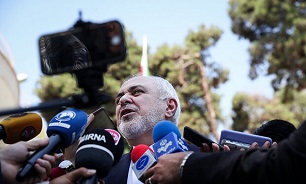 Speaking to reporters on Monday, Zarif said the imminent visit of the IAEA Chief Rafael Grossi has nothing to do with the United States’ latest effort to use the so-called snapback mechanism to restore UN sanctions against Tehran.

“We will not allow the US and the Israeli regime, which possess nuclear weapons in the region and have already used such weapons, to ridicule the IAEA’s goals,” he stressed.

Referring to the recent failure of the US at the United Nations Security Council to impose new sanctions on Iran, Zarif said, “As 13 out of 15 UNSC member states have already expressed, they are against such a move.”

Referring to the US’ unilateral withdrawal from the nuclear deal in 2018, and regarding that Washington is no longer a participant to the pact, Zarif said, “They [UNSC member states] are not only against this move [the anti-Iran resolution], but they also believe the US has no right to enter this issue.”

“We are always ready to continue our cooperation with the IAEA, and the forthcoming visit by the agency’s chief is in the same vein,” he added.

The UN nuclear agency's chief will arrive in Tehran on Monday and hold talks with Iranian authorities on Tuesday and Wednesday.

On Sunday, Iran's permanent representative to Vienna-based international organizations, Kazem Gharibabadi, also rejected any link between Grossi’s Tehran visit, saying the trip does not come at the US' request.

The Iranian diplomat noted that Tehran's trust in the IAEA has been damaged in recent months, adding that it is necessary that Grossi's visit be aimed at building trust.

"We will not allow other parties to sway relations between Iran and the agency, particularly under the current sensitive circumstances," Gharibabadi said.

"It is important [for the IAEA] to assure Tehran that the agency will act on the basis of three fundamental principles of impartiality, independence and professionalism, and will not go beyond its standard principles as well as its own independent data when dealing with safeguards-related issues," he pointed out.