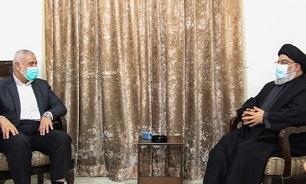 The meeting came during a recent visit to Beirut by the Hamas official, Ismail Haniyeh, who has traveled to the Lebanese capital for the first time in 27 years for an across-the-board meeting of all Palestinian factions, the Lebanese Arabic-language online newspaper Elnashra reported on Sunday.

Haniyeh and Hezbollah Chief Seyed Hassan Nasrallah used the opportunity to address political and military developments across the Palestinian territories and Lebanon.

The two prominent resistance figures also discussed the so-called Deal of the Century, the growing trend of normalization between some Arab regimes and Israel as well as the international Muslim community’s responsibility in the face of these threats.

The United States, Israel’s biggest ally, wheeled out the controversial deal this January. The scheme ensured Tel Aviv of Washington’s support for huge violations against Palestinians, including the Israeli regime’s annexation of some 30 percent of the occupied West Bank.

The officials emphasized the need for the resistance front’s steadiness and strength to counter these threats facing the Palestinians and the broader Muslim world.

In a statement, Hezbollah said the two resistance leaders insisted that relations between their movements must be characterized by strength and cooperation.

The groups’ ties “have been founded on the principles of faith, brotherliness, Jihad (struggle on the path of God), common destiny, and expansion of [standing] cooperation and coordination mechanisms between them”, it added.

The movements have spearheaded resistance efforts against Israeli aggression in their respective nations.

Hamas defends the Gaza Strip against Israel. Tel Aviv has taken the Palestinian territory under incessant attacks, three all-out wars, and a crippling siege since 2007.

Hezbollah has also fought off two Israeli wars targeting Lebanon in the 2000s, each time forcing the Israeli military into a retreat.

The plenary gathering of the Palestinian factions also featured emphasis on the same points raised during Haniyeh and Nasrallah’s meeting.

The principles being targeted, the statement added, included the Palestinians’ right to an independent state “on all occupied Palestinian territories” as well as Gaza, and the right of the Palestinian refugees to return to their homes.