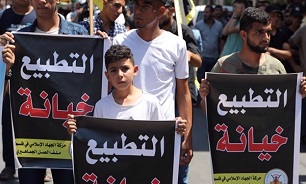 Hamas announced in a statement on Thursday that the Arab League’s move showed that the regional organization has abandoned its duties towards Palestinians and the Palestinian cause, and is seeking to give legitimacy to normalization with the occupying Israeli regime, presstv reported.

The statement went on to criticize the Arab League for turning a blind eye to the ongoing Israeli violations and crimes against Palestinians, and said such a move helped Israel press ahead with its occupation policies.

The Palestinian resistance movement underlined that the move by the Arab League has actually undermined the organization’s raison d'être, which hinges upon defending Arabs against foreign threats, especially the occupation of Palestine.

On Wednesday, Arab foreign ministers attended a virtual session against the backdrop of UAE’s agreement to normalize relations with Israel, but did not condemn the US-brokered accord that is to be formalized at a signing ceremony at the White House next week.

“In the face of the UAE-Israeli normalization agreement, it has become necessary for us to issue a position to reject this move. Otherwise, our meeting will be considered a blessing or being complicit with the normalization,” he said.

Meanwhile, the Palestinian Authority on Sunday accused the UAE and Bahrain of blocking the draft resolution that called on Arab states to adhere to the 2002 “Arab Peace Initiative” plan before normalizing ties with Israel.

The so-called Arab Peace Initiative, which was proposed by Saudi Arabia, calls on Israel to agree to a “two-state solution” along the 1967 lines and a “just” solution to the Palestinian refugee issue.

Separately, the International Union of Muslim Scholars (IUMS) has religiously forbidden any Muslim state to normalize ties with Israel.

The Qatar-based organization said in a fatwa (religious decree) that the Palestinian cause is not just a political issue, but rather related to al-Aqsa Mosque – the third holiest site in Islam.

“Normalization agreements concluded with Israel, which occupies most of Palestine, including al-Aqsa Mosque, and plans to occupy the rest of the Palestinian territories amount to a concession of the holiest and most blessed land, and an acknowledgment of the legitimacy of the occupying enemy as well as its crimes against the Palestinian people,” it said.

“Therefore, the so-called peace, reconciliation, or normalization agreements, in this case, are forbidden and void in Islamic Shari’a (jurisprudence), and a major crime, and a betrayal to Islamic nations,” the IUMS stressed.

Israel and the UAE agreed to normalize relations on August 13.

While Emirati officials have described the normalization deal with the Tel Aviv regime as a successful means to stave off annexation and save the so-called two-state solution to the Israeli-Palestinian conflict, Israeli leaders have lined up to reject the bluff of Abu Dhabi's crown prince and de facto ruler of the UAE, Sheikh Mohammed bin Zayed Al Nahyan, that Israel's annexation plans were off the table.

The Palestinians have vehemently censured the UAE-Israel peace deal, which runs counter to a long-standing Arab consensus that any normalization of ties with the Tel Aviv regime has to come in the context of the settlement of the Israeli-Palestinian conflict and the establishment of a sovereign Palestinian state.

They say the UAE, as an important Arab player in the region, has stabbed fellow Palestinians in the back and that the agreement does not serve the cause of the Palestinians.