Spokesman:
Iran has no worries about snapback activation
TEHRAN (defapress) – Iranian Government Spokesman Ali Rabiei in a note on Saturday said Iran is not worried about the probable activation of the so-called snapback mechanism, noting that the US benefits from its anti-JCPOA policies.
News ID: 82052 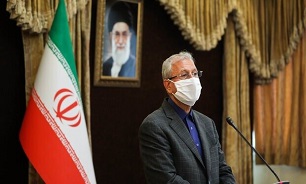 "Thirty days ago, the United States, in a move against international law, called for activation of the mechanism. Evidence suggests that Iran could witness another success in the context of multilateral diplomacy and see the failure of the United States in imposing its unilateralism as well as its failure in activating the trigger mechanism," he wrote.

"In none of its self-imposed crises the US has been so discredited in the international arena," he added.

Rabiei underlined that a decade ago no one could imagine that one day US allies would loudly say 'no' to Washinton but this has occurred today.

It is unbelievable that all members of the most important security institution in the world (the UNSC) are unitedly doing their best to rescue the JCPOA, he highlighted.

Referring to Pompeo's claims about the snapback mechanism against Iran, he wrote: Regarding the upcoming US presidential elections the White House officials seek to achieve their planned goals by pushing Iran to pull out from the JCPOA.

He added that the most warmongers of the US officials want to distract the US public opinion from Trump's measures in the past years to a new debate and adventure during the recent days of his tenure.

The current US administration has used all the capabilities of sanctions and there is nothing more to gain for them via sanctions, he said, the snapback mechanism is the US new leverage to pull Iran into a new playground.

But Iran has no worries even about the activation of the mechanism, Rabiei underscored.

The spox added that "Today's diplomatic isolation of the United States is the result of Iran's patience on the day that Donald Trump decided to withdraw from the JCPOA.