Vaezi:
Iranians' resilience to US sanctions cause of recent success
TEHRAN (defapress) – In reaction to recent US efforts to return UN sanctions on Iran, President's Chief of Staff Mahmoud Vaezi said that the US illegal efforts were once again failed, and the legitimacy of Iran's stance was reaffirmed.
News ID: 82077 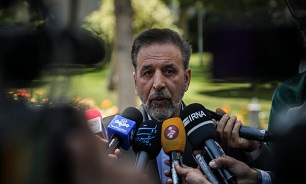 "As expected and we have already informed Iranian people, the extensive political and illegal efforts of the United States were once again failed and the legitimacy of the Islamic Republic of Iran's position in the international arena was reaffirmed," said Vaezi.

"What set the stage for these victories in recent months was, in fact, Iran's regular political and legal moves during the US withdrawal from the JCPOA. When the Islamic Republic of Iran, without any haste and with a firm legal logic, managed the developments in such a way that today the United States is isolated and has no supporters except a few small countries and the Zionist regime," he added.

Vaezi called active diplomacy and Foreign Ministry's extensive efforts a major factor in US isolation in recent months, saying, "The diplomatic efforts of the Islamic Republic of Iran have shown the real face of the United States which for years claimed the support of democracy and international rights."

"Undoubtedly, the recent success that has resulted from the resilience of our people against the US sanctions and maximum pressure, and the insistence on the rights of the country and the resistance against the extravagance of enemies, is a source of pride for the country and all people and political groups," he stressed.