Yemen’s Ansarullah Leader:
US, Israel Source of All Acts of Evil in World
TEHRAN (defapress)- The leader of Yemen’s Houthi Ansarullah movement censured the United States and Israel over their fiendish policies and conspiracies against world nations, saying Washington and Tel Aviv are the main source of all evil acts across the globe.
News ID: 82086 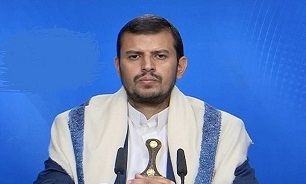 “The policies of the US and Israel have only caused crises and wars across the world. We (the Yemeni people) are confronting the sources of evil and aggression in order to secure peace in our country,” Abdul-Malik al-Houthi said in a televised speech broadcast live from the Yemeni capital of Sana’a on Monday afternoon, presstv reported.

He highlighted that Washington has been seeking to sow seeds of discord within the Yemeni nation, and to create sectarian rift in the country.

Houthi said that US statesmen had set their sights on Yemen long before the September 21 Revolution – the 2014 popular uprising that toppled the Saudi-backed Hadi’s government -- as the Arab country enjoys a fairly strategic location and has large reserves of natural resources.

“Enemy plots have deprived Yemeni people of revenues of the country’s natural resources. The previous government [of former president, Abd Rabbuh Mansur Hadi] collaborated with the US in order to plunder Yemen's resources,” the Ansarullah chief further pointed out.

"The US pursued colonial policies during the previous Yemeni government," he said, adding, previous US Ambassador to Yemen Matthew H. Tueller used to meddle in the work of all Yemeni state institutions and ministries.

Houthi noted that the September 21 Revolution was deeply rooted in the Yemeni people’s demand for reforms and change and said, “After the revolution, the US realized that Yemen is not an easy prey, and is never akin to Saudi Arabia and the United Arab Emirates to be exploited to the fullest".

The Ansarullah chief underlined that Saudi Arabia and its allies have miserably failed to force Yemeni people into abandoning their revolutionary spirit after more than four years of devastating military campaign and crippling siege.

“The Saudi-led coalition of aggression has perpetrated the most heinous crimes against Yemeni people over the past years. Saudi Arabia has failed to wrest control over Yemen despite US' generous support for its vicious onslaught,” Houthi said.

Commenting on recent US-brokered normalizations deals between Israel and two Arab states of UAE and Bahrain, Houthi said the US has been taking advantage of Saudi Arabia and the UAE to advance its agendas in the Middle East region, saying all actions of the Riyadh, Abu Dhabi and Manama regimes are meant to serve the interests of Washington and the Tel Aviv regime.

“Palestinians are not left alone in the face of the recent agreements by some Arab states to normalize ties with Israel. The UAE and Bahrain simply brought to light their illegitimate and clandestine relations with the Zionist regime,” Houthi said.

“The US, Saudi Arabia and their regional allies have all paid heavy price only to safeguard the interests of Israel in the region,” he noted.

Houthi concluded, “Peace, independence and dignity can only be achieved through deterrence, and not by means of complete surrender.”

Palestinians, who seek an independent state in the occupied West Bank and Gaza, with East Jerusalem as its capital view the deals as a betrayal of their cause.

Palestinian President Mahmoud Abbas protested the normalization deals with Israel, saying they will be fruitless as long as the United States and the Israeli regime do not recognize the rights of the Palestinian nation and refuse to resolve the issue of Palestinian refugees.

He reiterated that there will be no peace, security or stability for anyone in the region unless the Israeli regime ended its occupation of Palestinian land, and Palestinians could restore their full rights as stipulated in international resolutions.