Zarif Hails Russia, China’s Support for Iran against US at UN
TEHRAN (defapress) – Iran’s Foreign Minister Mohammad Javad Zarif hailed the show of unity by the remaining parties to the 2015 nuclear deal, particularly Russia and China, after almost no one followed Washington’s lead to “snap back” UN sanctions on Iran.
News ID: 82101 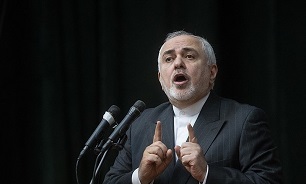 Russia and China have played a leading role in standing against Washington’s law-breaking behavior at the UN, Zarif told reporters upon his arrival in Moscow on Wednesday night.

The United States has imposed new unilateral sanctions against Iran after it failed to garner support for its anti-Iran move at the United Nations.

US Secretary of State Mike Pompeo, flanked by some other members of the administration of President Donald Trump, announced the sanctions on Monday, a day after Washington unilaterally declared that all UN sanctions against Tehran were re-instated.

Zarif further described the ties between Tehran and Moscow as “very good”, saying that his trip is aimed at promoting coordination between the two countries and reviewing the latest developments in the region.

We are facing serious problems in the region, the top Iranian diplomat said, adding that the Syrian crisis is still an issue that needs a special coordination effort between Iran, Russia, and Turkey.