Trump Declines to Commit to Peaceful Transfer of Power, Drawing Swift Criticism
TEHRAN (defapress) – US President Donald Trump declined to commit to providing a peaceful transfer of power if he loses the election, prompting a backlash on social media from critics who said it raised questions about his willingness to relinquish power.
News ID: 82104 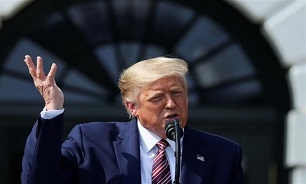 "Well, we're going to have to see what happens," Trump said on Wednesday when asked directly whether he would commit to a peaceful transition, assuming he lost the election, the USA Today reported.

"You know that I've been complaining very strongly about the ballots and the ballots are a disaster," Trump told reporters, referring to state where ballots are mailed automatically to registered voters. "Get rid of the ballots and you'll have a very a peaceful – there won’t be a transfer, frankly, there’ll be a continuation.”

“What country are we in? I'm being facetious," Biden said, adding, "Look, he says the most irrational things. I don't know what to say."

In the past Trump has declined to say whether he would accept voters’ results, suggesting he wants to leave his options open to contest those results.

Trump has also repeatedly joked at rallies that he would seek more than two terms, a line he uses to show how he “triggers” outrage about his Democratic critics.

Trump’s latest remarks drew a firestorm of criticism on Twitter. The peaceful transfer of power between US presidential administration is a hallmark of the country's stability.

“People who are very chill about the president not committing to the peaceful transfer of power unless they ‘get rid of the ballots’ are too chill for me,” tweeted Sen. Brian Schatz, D-Hawaii. “This seems an awfully serious thing to be dismissive about. At the very least it’s a good reason to oppose him vigorously.”

"Fundamental to democracy is the peaceful transition of power; without that, there is Belarus," Romney tweeted. "Any suggestion that a president might not respect this Constitutional guarantee is both unthinkable and unacceptable."

Joe Lockhart, a former spokesman to President Bill Clinton, suggested that every Democratic member of Congress send a letter to the president “demanding he commit to the peaceful transition of power in writing. If he won't, impeachment is a viable option.”