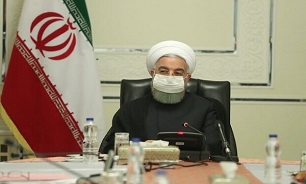 Referring to the hostile actions of the United States against the Iranian people, Rouhani said on Saturday, "The US recently announced that they have damaged tens of billions of dollars to Iran while in 2018, 2019 and 2020, at least 150 billion dollars was damaged to the country."

He made a strong protest to the White House over the inhumane sanctions and maximum pressure on Iran, saying that the White House is responsible for the crimes against humanity due to shortage of medical and emergency supplies.

"They prevented the import of medicine and food by their wrong, illegal, unjust and inhumane sanctions and terrorist operations," he added, saying, "They are the people we have never seen in the history of the White House with this atrocity, they committed the greatest atrocity."

“The one who is Foreign Minister but in fact he is Minister of Crimes, proudly says that we blocked 70 billion Iranian resources and did not allow them to be given to Iran, and we are proud of the enmity with the Iranian nation and the hit to Iran,” Rouhani said.

All should know that the White House is accountable for the inhumane sanctions on Iran, stressed the President.

“The Islamic Republic of Iran has done nothing wrong. It is faithful to its promise. They have withdrawn [from JCPOA] unilaterally and against all regulations,” he said.

“Undoubtedly, the US government will one day surrender and kneel before the Iranian nation,” he said, stressing, “The Iranian people will be victorious.”