Jahangiri:
25-year agreement to open new chapter in Iran-China ties
TEHRAN (defapress) – First Vice President Es’hagh Jahangiri expressed congratulations to the Chinese officials and people on the occasion of the 71st anniversary of the establishment of Modern China which is celebrated on October 1.
News ID: 82162 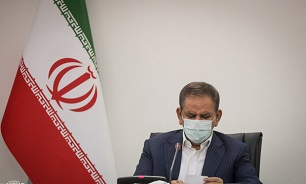 He pointed to the history of ties between the two countries and cultural commonalities, noting that the common stance and view of Tehran and Beijing towards some international developments and the both countries’ determination to fight unilateralism have created a firm ground for strategic and comprehensive cooperation between Iran and China.

Jahangiri added that the signing of the 25-year comprehensive agreement will open a new chapter of ties between the countries.

He also said that cooperation between Iran and China in the fight against COVID-19 has had great results and has drawn a bright horizon in fighting the outbreak.

He wished the Chinese officials health and success and the people of China prosperity and felicity.