Iranian FM Labels US Assassination of General Soleimani As Terrorist Act
TEHRAN (defapress)- The Iranian foreign ministry in a statement underlined that the US assassination of former IRGC Quds Force Commander Lieutenant General Qassem Soleimani was a terrorist act, adding that the culprits behind the crime have been identified.
News ID: 82176 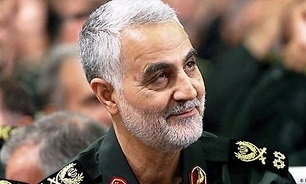 Washington’s assassination of General Soleimani was a “criminal terrorist act”, the statement said on Saturday.

It added that the “Islamic Republic of Iran’s security and military forces have been making efforts to collect information on the criminals involved in the heinous assassination and a number of them have been identified and others will be identified soon”, it said.

The Iranian foreign ministry announced that the country has filed 5 letters with the UN Secretariat on the US criminal act of assassination of General Soleimani.

Lieutenant General Soleimani was assassinated in a US drone strike on Baghdad International Airport in Iraq on January 3.

The airstrike also martyred Deputy Commander of Iraq's Popular Mobilization Forces (PMF) Abu Mahdi al-Muhandis. The two were martyred in an American airstrike that targeted their vehicle on the road to the airport.