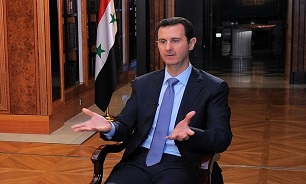 In an interview with Russia’s Ministry of Defence TV channel Zvezda on the fifth anniversary of Moscow’s presence in Syria, Assad said Tehran and Moscow have greatly contributed to moving toward the realization of Syria’s peace process.

He noted that apart from helping it fight terrorism, Russia’s military presence in the Arab country is important to ensuring international order.

“The Russian military role in Syria – particularly the role of military bases [on the Syrian soil] – can be viewed from two perspectives; the first is fighting terrorism, which we call international terrorism.”

“This will end one day or at least it will be weakened as a result of the continuing battles to eliminate it,” he noted.

“So, what comes after this terrorism? The other perspective is related to the role of Russia in the world. Today, we live in an international jungle; we do not live under international law,” Assad said, Press TV reported.

The current disorderly global situation, he said, had been caused by a lack of adherence to international law for around a quarter of a century. “International balance requires a Russian role: politically – in international organizations, and militarily – through military bases.”

Russia runs an airbase, known as Hmeimim, in the northwestern Syrian province of Latakia, and the Tartus naval facility on the country’s Mediterranean coast. Last August, a Russian government document surfaced showing that Damascus had agreed to allow Moscow to expand the Hmeimim airbase.

Since entering Syria, the Russian military has been staging airstrikes from the former outpost that, together with Iranian military advisory support, has enabled the country to reclaim most of the territory that it had lost to violence by foreign-backed militants and Takfiri terrorists.