EU Top Official Self-Isolating After Contact with Virus Case
TEHRAN (defapress)- European Commission President Ursula von der Leyen stated she has placed herself in isolation after being in contact with a person infected with the coronavirus.
News ID: 82203 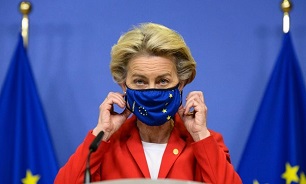 In a message posted on Twitter Monday, the head of the EU s executive arm said she took part in a meeting last Tuesday that was attended by “a person who yesterday tested positive”, The Independent reported

She noted that she tested negative for the virus on Thursday and that she will undergo another test later Monday.

Von der Leyen added she will be in quarantine until Tuesday morning.

Her isolation will keep her close to work, however, she has a small living quarters next to her office in the EU headquarters in Brussels.

Two weeks ago, EU Council President Charles Michel was forced to postpone a summit of EU leaders because he was quarantining.