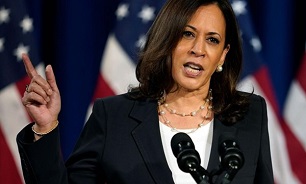 "This monster that was on stage with [Vice President] Mike Pence, who destroyed her last night by the way, but this monster, she says no no there won’t be fracking, everything she said is a lie," Trump said in an interview with Fox Business anchor Maria Bartiromo.

He went on to call her "horrible”, and “totally unlikeable”, as well as a “communist".

This is not the first time the president has launched baseless attacks against Harris since she became the Democratic vice presidential candidate and the first Black woman on a major-party ticket.

He's called her "incompetent", a "super liberal", and has painted a dark picture to his supporters of what would happen if Harris had to take over as president.

At a September rally in Fayetteville, North Carolina, Trump fabricated a White House conversation in which a President Joe Biden was forced to sign documents he didn't understand.

He mimicked Biden as saying, "I'm getting tired. I'd like to rest. I'd like to let Kamala take over as president!"

"That's no way to get into the office, because we're going to have a woman president someday, but you know what? It can't be Kamala," Trump said.

"Never!" a person in the crowd screamed.

In an exclusive interview with ABC "World News Tonight" Anchor David Muir in August, Harris brushed off insults directed at her by Trump, saying they reflect the president's attempts to "distract the American people".

"President Trump has referred to you as 'nasty,' a sort of 'madwoman,' a 'disaster,' the 'meanest,' 'most horrible,' 'most disrespectful of anybody in the US Senate.' How do you define what you hear from the president?" Muir asked Harris.

The California senator responded, "I think that there is so much about what comes out of Donald Trump's mouth that is designed to distract the American people from what he is doing every day. That is about neglect, negligence and harm to the American people."

Shaunna Thomas, executive director of the organization UltraViolet, which describes itself as a community of one million people "mobilized to fight sexism and create a more inclusive world that accurately represents all women", said that women are "tired" of Trump's "racism and sexism that has caused him to have the greatest gender gap in history".

"Trump is going all in on the racism and sexism that has caused him to have the greatest gender gap in history," Thomas said, adding, "Women are tired of this. We’re done. And we’re going to show up in overwhelming numbers to vote this guy out."