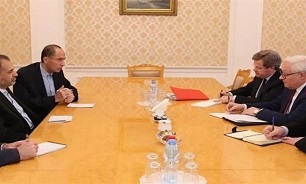 The Russian Foreign Ministry said in a statement on Friday that Iranian Ambassador Kazem Jalali and Russian Deputy Foreign Minister Sergei Ryabkov have discussed the situation around the Joint Comprehensive Plan of Action (JCPOA) at a meeting in Moscow.

"(The two sides) exchanged views on the situation around the Joint Comprehensive Plan of Action on the Iranian nuclear program. They highlighted the importance of further coordination of efforts of all its parties for the sustainable implementation of the agreement in accordance with UN Security Council Resolution 2231," the ministry said in a statement, Tass reported.

The sides also discussed some other issues of mutual interest, the statement noted.

Russian officials have always stressed the need to save the JCPOA and oppose the US’ unilateral policies.

Last month, Russian Foreign Minister Sergey Lavrov said Washington’s reasoning behind bringing back the UN sanctions against Iran looks “funny,” as the majority of UN Security Council members – 13 out of 15 – do not support activating the ‘snapback’ mechanism.