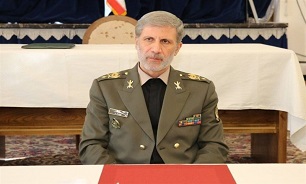 “The Islamic Republic has made outstanding progress in manufacturing satellite launchers and satellites,” General Hatami said on Thursday during a visit to the country’s Armed Forces Geographical Organization in Tehran.

Highlighting the importance of boosting the country’s aerospace technology, he called on the organization to double its efforts and help meet the country’s needs in this field.

“The Geographical Organization has a vital and sensitive role in developing Geographic Information Systems,” the minister added.

Iran has in recent years made great headways in manufacturing satellites.

The launch of the military satellite marked a milestone in the space industry in Iran.