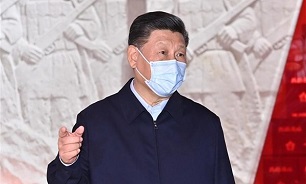 Xi, also general secretary of the Communist Party of China (CPC) Central Committee and chairman of the Central Military Commission, made the remarks while visiting an exhibition commemorating the 70th anniversary of the CPV army entering the Democratic People's Republic of Korea (DPRK) in the War to Resist US Aggression and Aid Korea, Xinhua reported.

Seventy years ago, the CPC and the Chinese government resolutely made the historic decision to fight the War to Resist US Aggression and Aid Korea in order to safeguard peace and resist aggression, Xi stressed.

Holding high the banner of justice, the heroic CPV soldiers gallantly fought side by side with the DPRK's people and army and won a great victory, making great contributions to world peace and human progress, he said.

Xi called the great spirit forged during the war a "precious spiritual wealth" that will inspire the Chinese people and the Chinese nation to overcome all difficulties and obstacles, and prevail over all enemies.

Xi demanded in-depth study and publicity of the heroic deeds and revolutionary spirit of the CPV army to encourage the Party, the armed forces and people of all ethnic groups to unite more closely around the CPC Central Committee, keep their faith in ultimate victory, and boost their abilities of struggles.

In doing so, Xi urged them to strive to build a moderately prosperous society in all respects, to secure the success of socialism with Chinese characteristics for a new era, to realize the Chinese Dream and the dream of building a powerful military, and to make more contributions to safeguarding world peace and promoting the building of a community with a shared future for humanity.

The exhibition consists of seven parts, including a section on how the decision to send the army was made and a section on the significance and historical contributions of the victory.

With more than 540 pictures, over 1,900 relics, a large number of videos and many recreated scenes, the exhibition features the important decision-making process, major events, key battles and historical figures in the war.

The exhibition gives a comprehensive review of the glorious process of the CPC-led fight and the precious experience accumulated, with endeavors at the political, economic and diplomatic fronts also displayed.

It demonstrates the heroic and fearless spirit of the CPV soldiers, the patriotism of the Chinese people and the firm determination of the Chinese nation to defy hegemony and safeguard peace.

Xi and other Party and state leaders, drawn by the rich and innovative display of relics and archives, watched the exhibits with attention, listened carefully to the interpretation and made inquiries in detail.