Spokesperson:
Iran Stays Away from Arms Race
TEHRAN (defapress) – Iran would never enter a regional arms race despite the termination of the UN arms embargo, the spokesperson for the Iranian administration said, lashing out at the US for turning the region into a stockpile of weapons.
News ID: 82340 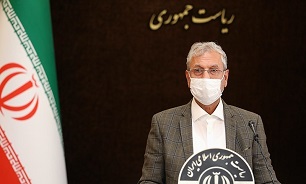 In response to a question about Iran’s plans after the termination of the UN arms embargo, Ali Rabiee said at a press conference on Tuesday, “The Islamic Republic of Iran does not intend to join the arms race in this region, which serves the financial interests of arms-producing companies.”

“I make it clear that we are concerned about this region turning into a stockpile of weapons, and hold the US accountable for the unbridled sale of arms to the region,” he stressed.

The spokesman noted that Iran has no special plans for arms trade for now, adding, “Whenever we deem it necessary - considering our legitimate and reasonable defense needs - we will take action in compliance with the customary international law and every state’s inherent right to self-defense.”

The arms embargo on Tehran was founded upon “false Iranophobia”, he stated, saying US President Donald Trump and Israeli Prime Minister Benjamin Netanyahu resorted to a massive Iranophobia campaign to prevent the removal of the arms embargo but failed.

“It basically lacked credibility,” Rabiee said of the push to extend the arms embargo that was terminated on October 18.

The futile arms sanctions against Iran have only strengthened the country’s self-reliance in the process of manufacturing defense products, he added.

“These sanctions did not restrict Iran’s defense capabilities, nor would the removal of these restrictions today result in any new change in the path we had already taken,” the spokesman said.

“As I mentioned, we have never started any war, and believe that security is ensured through the will of people and self-sufficiency. During the years that we faced the arms embargo, we had no choice but to work on research and development of the indigenous defense industry. After these years, today we enjoy great advantages in manufacturing special defense products, and are prepared to sell them at the request of purchasers with special conditions,” he added.

“We have red lines and considerations when it comes to arms trade. Our arms trade doctrine is not different from our defense doctrine,” the spokesperson concluded.