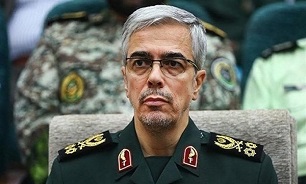 General Baqeri's remarks camein reaction to the recent statements of the French president late on Monday.

"They have created Takfiri and terrorist groups such as Daesh (ISIL) and have understood nothing of Islam," the top Iranian general said.

He reiterated that President Macron's anti-human rights rhetoric in support of the continued publication of blasphemous cartoons against the Holy Prophet Mohammad (PBUH), which he described as a support for the values ​​of secularism, once again exposed the nature of those claiming to be advocating human rights.

"Macron's rhetoric also revealed that, contrary to international rules and principles, they do not pay the slightest attention to respecting the divine religions," General Baqeri added.

He underlined that no excuse for insulting other religions can be found in any of the legal and international documents.

General Baqeri, meantime, called on the world's elites and thinkers to ask the French rulers and statesmen to set aside this dangerous game and do not play with the religious emotions, interests and feelings of the nations, especially more than one and a half billion Muslims, more than this.

The General Secretariat of the Organization of Islamic Cooperation (OIC) last Friday condemned continued attacks and incitement against Muslim sentiments and insults of Prophet Muhammad (PBUH).