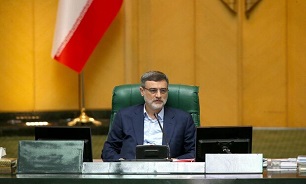 Speaking in the open session of Parliament on Wed., Seyyed Amir-Hossein Ghazizadeh Hashemi reiterated that insulting of the silly and stupid people like French President Macron to the Holy Prophet of Islam is due to the Islamic awakening and unity and amity of Islamic Ummah.

Today, If Islamic Ummah is united with one another, no great power in the world will dare confront it, he added.

“We are duty bound to establish unity and amity in the country and create a society based on compassion, kindness and empathy,” he emphasized.

Ghazizadeh Hashemi once again denounced insulting of French periodical to the Holy Prophet of Islam and support of French President for this move and called for dealing with perpetrators of his heinous act.

French President Emmanuel Macron has in recent weeks attacked Islam and the Muslim community, accusing Muslims of "separatism," and claiming that "Islam is a religion in crisis all over the world."

Macron has also approved the publication of blasphemous cartoons of the Prophet Muhammad (PBUH) and stressed that his country would not give up the insulting cartoons despite harsh criticisms from Muslims.