Ex-IRGC Commander:
US Left with No Option But to Retreat from Region
TEHRAN (defapress)- Former Commander of the Islamic Revolution Guards Corps (IRGC) Mohsen Rezayee said that withdrawal from the region is the inescapable fate of the American forces.
News ID: 82403 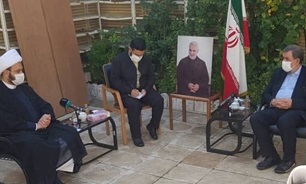 “The (anti-US) struggles and protests have undergone an outstanding increase and the US has been left with no other option, but to retreat from the region, and the theatrical relations between the betraying Arab states and the Zionist regime will not help them,” Rezayee, the current secretary of Iran’s Expediency Council (EC), said at a meeting with Secretary-General of al-Nujaba Movement Sheikh Akram al-Kaabi in Tehran on Wednesday.

He described the coming years as the years of expansion and reinvigoration of the resistance front, and said, “Not only the US will be expelled from the region, but also the plot for the Al-Saud, Bahrain and the UAE's concession to the holy Quds occupying regime will fail.”

Rezayee underlined Iran’s support for the Islamic resistance movements in Iraq, and said, “The resistance front will not allow Israel to become a surrogate of the US in the region and this goal will be materialized with the countries’ independence from the US. Saudi Arabia, Bahrain and the UAE should separate from the US and the next few years will be the years of controversy over separation from the US.”

“Any contract aiming to guarantee Israel’s survival is doomed to failure,” Rayeesi said in a meeting with outgoing Syrian Ambassador to Tehran Adnan Mahmoud on Wednesday.

He referred to the failure of previous deals with Israel, including Camp David, Oslo and Sharm al-Sheikh, and said the recent agreements between Tel Aviv and certain Arab regimes will also fail.

“The ties between the US puppet governments and Israel are no ties among nations and are unable to help the survival of the empty and the occupying Israeli regime and we are not concerned about these ties,” Rayeesi said.

Sudan became the fifth Arab country to sign a normalization agreement with Israel, following the announcement of a similar agreement between Tel Aviv, Abu Dhabi and Manama last month, signed in Washington under the auspices of US President Donald Trump. Jordan signed a peace agreement with Israel in 1994 and Egypt in 1979.

The Islamic Hamas movement in Gaza condemned the Sudanese government’s decision to normalize relations with Israel, like the UAE and Bahrain.

“Our heroic Palestinian people, together with all the people of the Arab and Islamic nations and the free world, have received the news of the Government of Sudan’s agreement to normalize relations with the Zionist enemy with great shock, condemnation and reprehensible،” the group said in a statement.

The statement added, “We express our condemnation, anger and disgust at this shameful and degrading normalization that is not befitting Sudan’s people, history, status and role as a deep state in support of Palestine and its cause and resistance.”

The statement called on the people of Sudan to reject the “agreement of shame”, which “will not bring stability or détente to the country, but will take it towards further fragmentation, narrowing and loss”.

It added, “We have confidence on the people of our nation that they will not be dragged into this quagmire as some regimes and governments have done, and the people of our nation will remain vibrant with the love of Palestine, al-Quds and the Blessed Al-Aqsa Mosque, and loyalty to the Palestinian cause until Palestine is cleansed of the tyranny of the usurped Zionist invaders.”