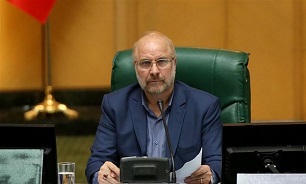 Certain Arab countries' normalization of relations with the Zionist regime will not last long and that its disgrace will stay with them in the history, Qalibaf said, addressing the 34th International Islamic Unity Conference on Thursday via video conference.

"The issue of Palestine is still the first priority of Islam; however, the rulers of a few Muslim countries have turned their backs toward Islam and have started to normalize relations with the fake and terrorist Zionist regime," he said.

Qalibaf said that the Islamic Unity Week is a symbol of solidarity and fraternity, adding that commitment to the Sunnah and the Holy Quran has always been the biggest reason of Islamic unity throughout history.

Any form of impertinence to Prophet Mohammad [PBUH] and the Holy Quran is actually insult to all the prophets, and anyone who does that lacks the minimum understanding of religion, ethics, spirituality, and humanity, he said.

Qalibaf said the commonalities of the Islamic Umma are so many that there can be no excuses for dispute and disunity.

As Takfiris lied and created clash in the region, there are some certain people in both Shiites and Sunnis that are focusing on disagreements to create a rift among Muslims, both of which should be condemned, he said, adding that if hands of disputes are off from the Islamic World, the more than 1.5 billion Muslims will have no problem with each other and will support one another as well.

Qalibaf said that Supreme Leader of the Islamic Revolution Ayatollah Seyyed Ali Khamenei considers unity as an eternal strategy and not a short-term tactic.

He also urged the Muslim nations to support each other in the time of coronavirus epidemic.

Sudan became the fifth Arab country to sign a normalization agreement with Israel, following the announcement of a similar agreement between Tel Aviv, Abu Dhabi and Manama last month, signed in Washington under the auspices of US President Donald Trump. Jordan signed a peace agreement with Israel in 1994 and Egypt in 1979.

The Islamic Hamas movement in Gaza condemned the Sudanese government’s decision to normalize relations with Israel, like the UAE and Bahrain.

“Our heroic Palestinian people, together with all the people of the Arab and Islamic nations and the free world, have received the news of the Government of Sudan’s agreement to normalize relations with the Zionist enemy with great shock, condemnation and reprehensible،” the group said in a statement.

The statement added, “We express our condemnation, anger and disgust at this shameful and degrading normalization that is not befitting Sudan’s people, history, status and role as a deep state in support of Palestine and its cause and resistance.”

The statement called on the people of Sudan to reject the “agreement of shame”, which “will not bring stability or détente to the country, but will take it towards further fragmentation, narrowing and loss”.

It added, “We have confidence on the people of our nation that they will not be dragged into this quagmire as some regimes and governments have done, and the people of our nation will remain vibrant with the love of Palestine, al-Quds and the Blessed Al-Aqsa Mosque, and loyalty to the Palestinian cause until Palestine is cleansed of the tyranny of the usurped Zionist invaders.”