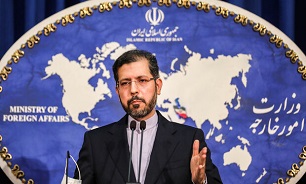 Saeed Khatibzadeh made the announcement on Monday, saying, "Iranian Foreign Minister Mohammad Javad Zarif will travel to Latin America tomorrow to attend the inauguration of Bolivia's new president Luis Arce, and then he will go to Cuba and Venezuela."

Referring to the developments in Bolivia and bilateral relations between Tehran and La Paz with the start of the new government, he added, "The Foreign Minister's visit shows the readiness of the two countries to restore relations to a high level."

He also expressed hope that Iran and Bolivia strengthen their relation in a good way to meet the interest of the two countries.

Elsewhere in his remarks, he referred to the anniversary of Aban 13 (Day of the takeover of the US Embassy), saying, "I think the extent of US hostility shows that it is still stubbornly insisting on its wrong policies, and as long as there is domination, resistance will be continued."

Referring to Iran’s initiative for Nagorno-Karabakh conflict and Araghchi's visit to regional countries, Khatibzadeh said, "Iran has presented a plan based on the principles of the international system, the elimination of occupation, the acceptance of international supervision, and international borders."

"We seek to resolve disputes, not just a ceasefire. In this regard, consultations were held at the highest level," he added.

Khatibzadeh also referred to Zarif's warning about the presence of terrorists on Iran's northern borders, said that this issue was raised by Araghchi during his trip to the region to resolve the Nagorno-Karabakh conflict.

"This is a serious concern and we talked about it seriously with the involved countries," he added.

"Some has denied the claims. But our worries are in place and  we are serious about it and we hope the reports are wrong," he noted.