Supreme Leader:
US Elections Not to Affect Iran's Policy
TEHRAN (defapress)- Supreme Leader of the Islamic Revolution Ayatollah Seyed Ali Khamenei underlined that Iran will continue its past policies irrespective of the results of the November 3 presidential elections in the US.
News ID: 82446 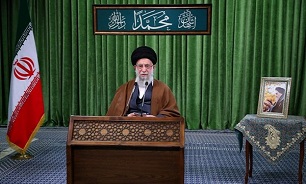 "No matter who wins the US elections, it won't affect our policy toward the US. Some people talk about what will happen if this or that one is elected. Yes, certain events may happen but they don’t concern us. Our policy is calculated and clear," Ayatollah Khamenei said in a televised speech on the occasion of the birth anniversary of Prophet Mohammad (PBUH) and Imam Jafar Sadeq (AS) the sixth Imam of Shiites on Tuesday.

Elsewhere in his remarks, the Leader commented on the present situation in the United States, and said the US regime is suffering from extreme political decline, civil and moral decadence.

"This is not just an analysis of the situation; this is based on what they say. This is what their spokespersons and their writers and think tanks from inside the US say," he said, stressing that this "US empire" will certainly not last long.

He also commented on the ongoing conflicts in the Nagorno-Karabakh, and said the war between Iran's two neighboring countries is a bitter issue which has to speedily come to an end.

He said the territories belonging to the Azerbaijan Republic should be liberated and the security of the Armenian nationals too should be guaranteed.

The Leader further stressed that the international borders should be respected and terrorists should never think of approaching Iranian borders because if they do so they will be strongly confronted.

Arrogant powers are using technology and science to suppress nations, he said, adding that though this kind of behavior on the part of arrogant powers has continued throughout history, it is more evidently used to serve the interests of the arrogant powers.

"In the Quranic stories, we see the Pharaoh of Egypt exercising all kinds of things according to his whims and wishes but now we see the US as the present-day Pharaoh does not suffice to just the US territory but goes to other countries, ignites wars there, establishes army bases so we can see that the Pharaoh-like powers are performing differently from their predecessors."

Today, the main enemies of Islam are the arrogant powers and the Zionism that are confronting Islam with all their power and they are fighting it.

The latest instance of such confrontation is this issue which took place in Paris last week because of a caricature by a person who did a wrong and made an insulting cartoon to the Holy Prophet of Islam, the Leader said.

Ayatollah Khamenei went on to stress that this wrongdoing by the French cartoonist is not just a mistake by a corrupt artist but there are certain hands in gloves behind the scene of this incident because there is no reason for a president and for a whole government to rise in support of such a cartoon or a cartoonist if it is a normal practice.

The main issue is the policy taken by a government which is supporting this wrong action and those political officials who are quite outspoken in its defense, he said, stressing that the vast and strong opposition to this heinous act by the Islamic Ummah shows how alive the Islamic world is.

There is a lesson to be learned for the French government, to learn from this because the French officials are trying to relate the event to such notions as human rights, freedom of expression and the likewise but they should be aware that this is an outcome of the same policy which made their country home to the most violent terrorist group in the world that has killed an Iranian President, a Prime Minister and many other ranking officials as well as a huge number of ordinary Iranians on the streets, the Supreme Leader added.

I believe these are two sides of a single coin. Meaning that defending cultural ferocity, that is the criminal act of that cartoonist and defending the MKO (Mojahedin-e Khalq Organization, also known as the MEK and PMOI) terrorists or helping the Saddam regime in attacking Iran are the two sides of a coin. Such behavior has kept repeating itself by the US and some of the European countries in the past few years, he added.

The Leader went on to note the luminous portrait of the Holy Prophet of Islam (PBUH) could not be tarnished by such actions, like the recent one as well as those that happened before. Rather, this shining sun will become brighter and brighter every day. As the history of the early day Islam proves, these people too will fail to tarnish the image of the Prophet, they will not be able to do that.

Such acts and behaviors are proof of the dark inner identity of western civilization; they reveal how dark this civilization, this culture of savagery and this modern-time ignorance are inside, he said, noting that they only serve to help us to recognize the nature of this civilization which is truly ferocious and savage.

In relevant remarks last week, Ayatollah Khamenei in a message to the French youth strongly blasted the destructive role played by French President Emanuel Macron and his government in supporting hatred against Muslims and spreading Islamophobia, following the recent sacrilege of Islam's Holy Prophet Mohammad (PBUH) in the European country.

The Iranian Leader blasted the role played by the French government in spreading Islamophobia, and raised important questions in his message.

“The next question to ask is: why is it a crime to raise doubts about the Holocaust? Why should anyone who writes about such doubts be imprisoned while insulting the Prophet (PBUH) is allowed,” Ayatollah Khamenei added.