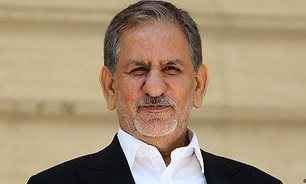 Jahangiri made remarks in separate congratulatory messages to his Muslim counterparts on the occasion of the birth anniversary of Prophet Mohammad (PBUH).

The 17th day of the lunar Islamic month of Rabi al-Awwal marks the birth anniversary of Prophet Mohammad (PBUH) and Imam Jafar Sadeq (AS) the sixth Imam of Shiites.

He pointed out that the Holy Prophet of Islam (PBUH) was a preacher of humanity, trustworthiness, brotherhood, and equality.

Today, getting rid of the cycle of ignorance and violence requires the prophetic wisdom and compassion more than ever, the first vice-president reiterated.

All the politicians across the world are responsible to eliminate the grounds for insult, enmity and violence, Jahangiri said.

His comments came in the aftermath of a measure by French satirical magazine Charlie Hebdo, which reprinted offensive caricatures of the Prophet Mohammad (PBUH) last month. The cartoons were originally published by the Danish newspaper Jyllands-Posten in 2005, and then republished by Charlie Hebdo in 2006.