Berlin concerned about 'explosive' situation in US
TEHRAN (defapress) – A high ranking official with the German government has assessed the situation in the United States following the Presidential election as 'explosive'.
News ID: 82456 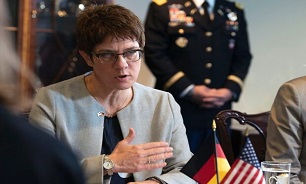 German Defence Minister Annegret Kramp-Karrenbauer said on Wednesday that the situation in the United States after the election is explosive and that she is concerned it could lead to a constitutional crisis.

"This is a very explosive situation. This is a situation that can lead to a constitutional crisis in the US, as experts are rightly saying. And it is something that must cause us great concern," she said on German television channel ZDF.

The remarks come as US incumbent President Donald Trump has claimed early victory, noting that Democrats are trying to 'steal' the election. He has also called for stopping counting votes.

However, Democrats have slammed the provocative remarks of Trump, noting that all the votes should be counted.

Meanwhile, protests have erupted across the country with fans of both rivals accusing the other party of fraud.