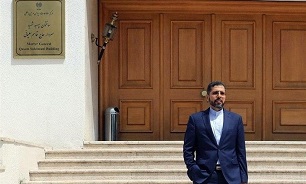 In comments on Tuesday, Saeed Khatibzadeh said Iran and China are engaged in talks on details of the long-term deal, whose results would be made public soon.

Rejecting reports on the suspension of the Iran-China negotiations until after the US presidential election, the spokesman said such untrue claims are raised by the hostile media outlets.

“The negotiations between the Islamic Republic of Iran and China about the 25-year deal are going on seriously, and have nothing to do with the elections of any country, particularly the United States of America,” he added.

In October, Iranian Foreign Minister Mohammad Javad Zarif traveled to China with a high-ranking delegation for an official visit that included talks on mutual cooperation.