Trump Questions Entire US Election, Claims He Won ‘Legally’
TEHRAN (defapress) - Accusing the Democrats of "stealing the election", US President Donald Trump on Thursday claimed that as per the "legal" vote count, he "easily wins".
News ID: 82470 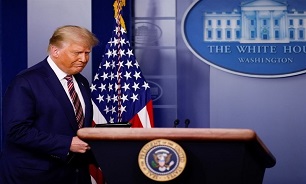 US President Donald Trump has called for defense of the integrity of the election, as key states are still counting votes that could determine the outcome. The race is still too close to call, according to US media.

“I’ve decisively won many critical states, including massive victories in Florida, Iowa, Indiana, Ohio, to name just a few. We’ve made these and many other victories despite election interference from Big Media, Big Money and Big Tech,” Trump said at the White House on Thursday evening, RT reported.

In a press conference where he didn't take any questions, Trump accused the media of “knowingly” circulating what he called “suppression polls” where he was trailing his Democratic challenger Joe Biden.

He referred to the polling by the Washington Post, Quinnipiac and others that was purposely skewed to falsely make Democrat rival Joe Biden appear to have a large lead to suppress Republican voter turnout.

He then claimed that the alleged count irregularities might cost his campaign what otherwise would have been a certain election victory.

Trump has doubled down on his allegations of widespread voter fraud by Democrats and electoral officials, touting lawsuits challenging the counting process as litigation that “will shake even you people up,” referring to the reporters.

With legal battles looming, Trump suggested that the US Supreme Court could have the final say in the election.

“ It's going to end up, perhaps, at the highest court in the land. We'll see.”

Speaking on the races in individual battleground states, Trump said that his campaign was “on track” to take Arizona. While the Associated Press and several other US media have already reported that Biden had flipped the historically red state blue, the GOP pins hopes on thousands of votes from Republican-leaning areas of the Sun Belt state that are still being counted.

Trump sounded less optimistic when speaking about his current standing in Georgia, where his initial massive lead has evaporated, with the latest figures showing him some 3,600 votes ahead of Biden.

“By now...it’s getting to a point where I’ll go from winning by a lot to perhaps being even down a little bit," he said.

As things stand according to the AP’s current tally – assuming Arizona remains blue – Biden needs only 6 more delegates to secure the 270 required for victory. He is currently leading in Nevada by around 12,000 votes, which if called in his favor would provide the remaining electoral votes he needs. Trump, meanwhile, has claimed 214 delegates, and currently leads in the undecided states of Alaska, Georgia, North Carolina and Pennsylvania, all of which he would need to sweep in order to pull out a victory.