Graham:
Judiciary Committee to Probe ‘All Credible Allegations of US Voting Irregularities’
TEHRAN (defapress) – Sen. Lindsey Graham announced Saturday that the US Senate Judiciary Committee would investigate possible voting irregularities after receiving an affidavit from a Pennsylvania postal worker alleging a plot to backdate ballots mailed after US Election Day.
News ID: 82484 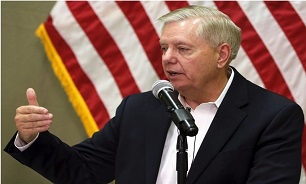 “It is imperative that all credible allegations of voting irregularities and misconduct be investigated to ensure the integrity of the 2020 elections,” Graham, a South Carolina Republican and the chairman of the Judiciary Committee, said in a statement. “I will not allow credible allegations of voting irregularities or misconduct to be swept under the rug.”

The senator said he will call on the Justice Department to investigate the postal worker’s claims and ask the postmaster general to look into them as well.

Richard Hopkins, a mail carrier from Erie, Pa., accused his boss of fraud in the affidavit.

“Although, as I understand Pennsylvania law, ballots must be postmarked by 8:00 p.m. On Election Day, November 3, 2020 in Pennsylvania, Postmaster Rob Weisenbach directed my co-workers and I to pick up ballots after Election Day and provide them to him,” he said, Fox News reported.

In addition, he alleged that he overheard Weisenbach tell another supervisor he was backdating the late ballots to make them appear as though they had been collected on Nov. 3 – “despite them in fact being collected on Nov. 4 and possible later.”

David Partenheimer, a spokesman for the Postal Service, said the agency first learned of the allegations on Friday.

"They were immediately referred to the US Postal Inspection Service and the Office of Inspector General, and the matter remains under investigation,” he said.

Graham argued that the massive surge in mail-in voting had made the Postal Service’s role in the elections much larger than usual.

“This change in mission requires there to be further scrutiny to ensure the system is beyond reproach,” the senator said. “Every American should want our election processes to work accurately, and given the recency of such a large volume of mail-in voting, that will require oversight.  Election outcomes are not determined by media outlets but certified, accurate vote counts.  Officials in Pennsylvania should take allegations from Mr. Hopkins and others seriously before certifying a final outcome.”

The remarks come as US President Donald Trump has questioned the validity of mail-in voting in a number of key swing states, Pennsylvania in particular. The Trump campaign and Republican groups have already filed a flurry of lawsuits in the state.

A spokesman for the Biden campaign did not immediately respond to a Fox News request for comment on the mail carrier's allegations -- but on Twitter the former vice president has called for voters to "stay calm" amid controversy over slow ballot counting.

"The Process is working," he wrote Thursday, before becoming the projected 2020 presidential election winner. "The count is being completed."