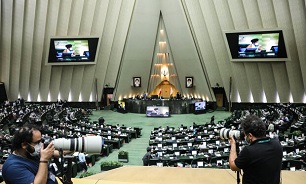 “With the new ‘strategic plan’ in place, we are sending a message to the 4+1 group that we no longer deal passively with the West,” Member of National Security and Foreign Policy Committee of Iranian Parliament Mohammad Ebrahim Rezaei told Mehr News on Sunday.

"It is logical to remain as much committed to the 2015 nuclear deal [JCPOA] as the other parties are sticking to their obligations,” he said.

Noting that Iran has exerted every effort in recent years to fulfill its responsibilities under the nuclear deal’s framework, the lawmaker said, “However, the other side almost showed no obligation to the pact, and we saw that the Americans withdrew from deal."

He said that the strategic action plan emphasizes the resistance strategy of the Islamic Republic of Iran, “and our message is that we are standing firmly on our position no matter who takes office after the US presidential election.”

“Besides, we will continue our path of resistance and will never fall for any miscalculations in this regard,” he stressed.

He noted that the details of the plan will be publicized after finalization.

Earlier in November, the Iranian Parliament put forward a bill on “strategic action” for lifting the sanctions after the failure of the JCPOA’s European parties to fulfill the country’s interests under the nuclear deal and the escalation of American sanctions and hostile measures.

The Iranian lawmakers have agreed to discuss the ratification of the bill entitled “the strategic measure for the removal of sanctions.”

The bill has been proposed after a phased reduction in Iran’s commitments to the JCPOA and the Iranian president’s warning to the EU3 about their support for the constant intensification of cruel American sanctions against Tehran.

The lawmakers have also cited the American assassination of top Iranian commander Lt. General Qassem Soleimani, acts of sabotage in Iran’s Natanz nuclear site, the US’ illegal attempts to reinstate the UN sanctions on Iran, and Washington’s plots to disrupt foreign cooperation with Iran.

According to the 9-article bill, the Atomic Energy Organization of Iran will be required to produce and store at least 120 kilograms of enriched uranium with 20 percent purity level at the Fordow nuclear facility every year, and to fulfill the country’s peaceful industrial demands with uranium enriched above 20%.

Based on the motion, if the European parties to the JCPOA start observing their obligations within three months following approval of this law, the Iranian administration should submit a proposal to the parliament on Iran's reciprocal measures for restoring full implementation of its JCPOA obligations.