Rouhani advises Biden's admin. to restore US tarnished image
TEHRAN (defapress) – Iranian President said the new US goveadministration needs to restore the tarnished image of the country as well as its international ties.
News ID: 82503 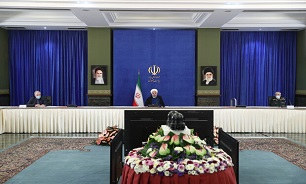 President Hassan Rouhani in his Tuesday remarks, addressing the Government Economic Coordination Headquarters, noted that the new US administration must, more than anything else, reconsider the US' inhumane behavior with other nations in order to restore its tarnished image in the international community.

In this meeting, the Iranian foreign ministry and the Central Bank of Iran agreed to enhance cooperation on having Iran's frozen assets in foreign banks.

The US enmity towards the Islamic Republic of Iran has been so high that it started a full-fledged economic war against the Iranian nation.

Trump’s enmity and hostility towards the Iranian nation were unprecedented which had been formed under the influence of Zionists, Saudis, and extremist groups in the United States.

The collapse of the Establishment in the Islamic Republic of Iran and crippling economy of the country was the main objective of the US government under Trump.

Iranian officials underline that a change of US president does not mean a change of macro policies of this country towards the Iranian nation.

Iran has already rejected the possibility of any 'renegotiations' over its nuclear deal, known as the JCPOA, with the Biden administration.