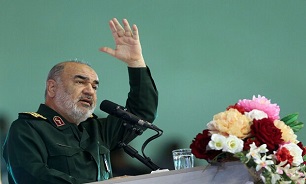 “The enemy has changed the position of its animosity; it has targeted our people’s religion, culture, livelihood and health,” Major General Salami said on Wednesday, in a speech on the occasion of Basij Week.

However, he added, the Iranian nation, along with selfless Basij volunteer forces, will continue their steadfastness against such pressures, till the enemies’ hegemonies decline.

“We will stand firm till the end… Basij is also continuing this path to defend the high values of the nation under the instructions of the Leader of the Islamic Revolution.”

The Leader described Basij as great wealth and God-given blessing for the Iranian nation, saying, that this is why the enemies of the Iranian nation have always been thinking of destroying or neutralizing Basij."