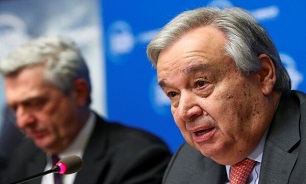 A United Nations spokesman on Friday called for exercising restraint and avoiding escalation in the region following the assassination of top Iranian nuclear scientist Mohsen Fakhrizadeh.

"We have noted the reports that an Iranian nuclear scientist has been assassinated near Tehran today. We urge restraint and the need to avoid any actions that could lead to an escalation of tensions in the region," Farhan Haq, the deputy spokesman for UN Secretary-General Antonio Guterres, said when responding to a question related to the assassination.

In a letter to Guterres and Inga Rhonda King, the president of the Security Council for the month of November, Iran's permanent representative to the United Nations Majid Takht Ravanchi expressed strong condemnation against the "criminal assassination" of its nuclear scientist.

He added Iran "expects the secretary-general of the United Nations and the Security Council to strongly condemn this inhumane terrorist act and take necessary measures against its perpetrators."

The prominent physicist was transferred to the hospital immediately after the attack but was martyred due to the wounds he had sustained in the terrorist assault.