Spokesman: Iran Not to Renegotiate N. Deal
TEHRAN (Defapress) - Iranian Foreign Ministry Spokesman Saeed Khatibzadeh reiterated his country’s opposition to renegotiating the nuclear deal, saying that any change in its form or content will kill the internationally-endorsed agreement.
News ID: 82722 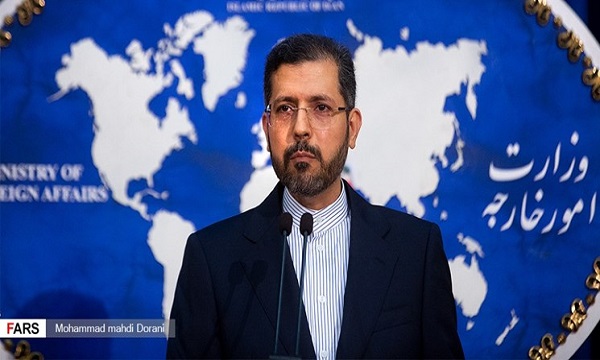 “All those familiar with the international laws know that Iran will not do renegotiation on something which has been negotiated before and the resolution 2231 will not change by these remarks,” Khatibzadeh told reporters in a video conference on Monday in reference to German officials’ comments on negotiations on a new nuclear deal.

“The nuclear deal is something related to the past and has been negotiated and it has had its own pros and cons and the points in it have been considered precisely and it has been sealed and any change in its form and content means the end of the nuclear deal,” the spokesman said.

He expressed the hope that Europe would understand its position and capacities, noting that the European countries were the parties that have defied their nuclear deal undertakings.

“We expect them to show heed to the realities and realize that Iran neither negotiates nor compromises on its national security,” Khatibzadeh said.

In relevant remarks last month, Iranian President Hassan Rouhani said that the Iranian nation will continue to resist against the US pressures until forcing Washington to surrender to law.

"The Iranian people, through their heroic resistance to the US’ economic war, have proved that Washington’s policy of maximum pressure is doomed to failure," Rouhani said.

“The next US administration should use the opportunity to make up for the past mistakes against Iran,” he noted.

Also in November, Rouhani lauded his nation for their resistance against the US pressures and sanctions in the past 3 years, expressing the hope that the new administration in the White House would take lesson from the past failures and rejoin the nuclear deal.

“People faced economic terrorism in the past three years and showed competent resistance and patience. Our country’s decision is clear and our nation will continue its patience and resistance until the other side bows to the law and rules,” President Rouhani said, addressing a meeting of the national coronavirus campaign headquarters in Tehran.

“We hope that conditions alter in a way that those who have imposed sanctions will come to realize that they have moved along a wrong path, and that they will not attain their goals at all as they should take a lesson from this 3-year experience for the future US government to bow to the laws and rules and return to all its undertakings and (the Iranian) people would witness and feel the prize of their patience and resistance,” he added.