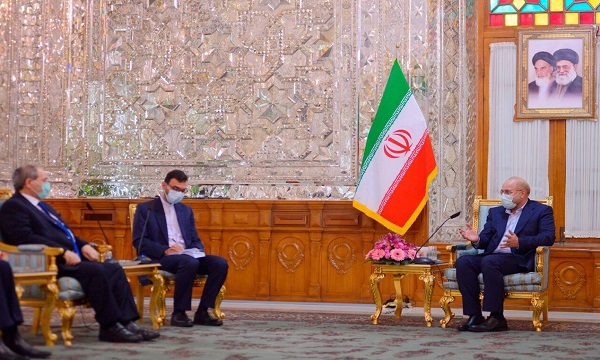 In a meeting with the visiting Syrian Foreign Minister Faisal Mekdad, Qalibaf congratulated him on his appointment as the Arab state's foreign minister.

Noting that the enemies of the two countries do not want the independence, dignity and progress of Islamic countries, Qalibaf added that the Zionist regime, with the support of the United States, seeks to normalize its relations with some Islamic countries.

The Syrian foreign minister, for his part, offered condolences over the assassination of Iran's defense industry scientist Mohsen Fakhrizadeh, saying that the assassinations of Fakhrizadeh and Iran's anti-terror commander Lieutenant General Qasem Soleimani once again showed the true face of the Zionist regime and the United States as supporters of terrorism.

Referring to the US presidential election and the election of Joe Biden as the new president, he added that the nature of the US governments is not different from each other and the US presence in different parts of the world has always contributed to the spread of insecurity and instability.