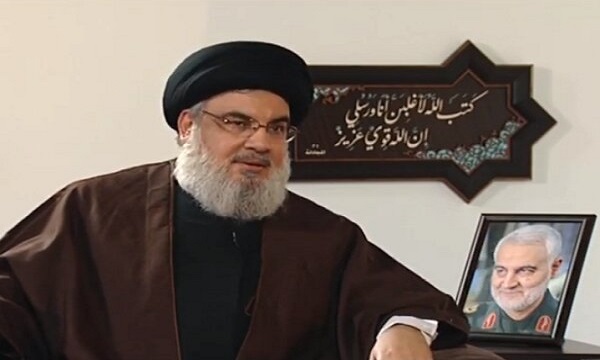 Nasrallah made the remarks in a televised interview with Al-Mayadeen on Sunday night.

The comprehensive interview comes on the threshold of the first martyrdom anniversary of Axis of Resistance’s leading figures Lt. General Ghasem Soleimani and Abu Mahdi Al-Muhandis in a US strike at Baghdad airport.

He noted that the Israeli regime is worried about the approach of the new US administration regarding the region.

Saying that Hezbollah has no information on the possible Israeli operation, he said the resistance group is not aware of any Israeli nuclear submarine heading toward the Persian Gulf.

Nasrallah said he could be a target of the Israeli regime's assassination operation as he is a Resistance leader.

He noted that the Saudi-led war on Yemen is only based on hatred towards Resistance Front.

“Saudis have sponsored thousands of suicide bombing in Iraq in recent years,” he added.

Nasrallah maintained that the US assassinated Iran’s Lt. General Soleimani was at the request of Saudis and the Zionist regime.

Sayyed Nasrallah underlined, “I, along with other Hezbollah leaders are targets for America and Israel.”

“We have information that Saudi Arabia is instigating to assassinate me at least since the war on Yemen started,” he continued.

Sayyed Nasrallah added that the US approved the Saudi demand of which Israel is the one to implement.

“Saudi Arabia, specifically in the last few years is acting with grudge not with mindfulness,” he said.

He went on to say that America, the Israeli regime, and Saudi Arabia are partners in the assassination of Lt. General Soleimani and Al-Muhandis.

“Hajj Qassem was a very special person on the humanitarian and moral levels… he had a special charisma and a strong ability to have an influence on anyone who knows him,” he highlighted.

“Militarily, Hajj Qassem was the frontline man not the man in the operation room, he was the many of strategy and tactics… Politically and culturally, he was well-educated in various fields,” The Secretary-General emphasized.

“In the last period before his assassination I was very concerned about him, especially after I saw how much Western media was focusing on him and highlighting his role and movement,” he noted.

Sayyed Nasrallah went on to say that Martyr Muhandis was a great commander and he resembled Hajj Ghassem a lot… His role on the political and military levels was great. He had the main role in the victories against US and ISIL.

“Hajj Ghasem had a relation with all the Palestinian factions, and his concern was that these factions get the support they need to resist the occupation. He had no red lines on the logistic support to them,” he said.

“Hajj Ghasem was the one behind sending the Kornet missiles to the resistance in Gaza,” Nasrallah continued.

Sayyed Nasrallah maintained that “Kornet” are the missiles we used in the July war. They are Russian missiles that Syria bought.

“Hajj Ghasem demanded that these missiles be sent to Gaza and I proposed the demand to President Assad since he was the one to buy them from Russia, and he approved,” he added.

“I am not surprised with the Arab betrayal because most of the Arab regimes have been only selling words to Palestine,” Nasrallah underlined.

No excuse to abandon Palestinian cause

Secretary-General of the Lebanese Hezbollah said, “Iran is only an excuse for the Arab regimes who normalized relations with Israel. This took place because the Palestinian cause has only become a burden on them.”

“There is no excuse for anyone to abandon Palestine,” he added.

“The resistance axis’s power today is greater than the past. What’s important today is the determination,” Sayyed Nasrallah continued.

“Palestinians of 1948 are our people and they want the liberation of Palestine more than anyone else,” he said.

He noted, "Between 2003 and 2011, Hajj Qassem’s role wasn’t highlighted on media, so people thought Al-Qaeda was fighting the American occupation. I assure you that the Iraqi resistance groups were the ones performing operation against the occupation, and we were in contact with them since then."

"The Iraqi resistance since then used to get support from the Quds force led by Hajj Qassem Soleimani."

The Hezbollah secretary general said "If it weren’t for the Iraqi resistance the US embassy would’ve been the one ruling Iraq."

He noted that "the goal behind the assassination of Hajj Qassem and Abu Mahdi Al-Muhandis was to erase the name of the resistance… millions of people came out and shouted we are all resistance."

referring to the Leader of Islamic Revolution's reaction to the assassination, Nasrallah said, "Imam Khamenei had said earlier that those who ordered and implemented the assassination of the two martyrs should be personally punished wherever they are… this should be the duty of every honorable person in the world."

"The first person among us to understand the plot being drawn for Syria since the beginning of the Arab spring was Hajj Qassem."

َAccording to Nasrallah, "Syria was not targeted only for its position on Palestine and the resistance but also for its oil and gas."

"President Assad never left Damascus and his decision to stand firm urged us to support him."

The Hezbollah chief said, "The joint drills between the resistance factions in Syria is of importance, it reveals power and scares the enemy."