General Qaani:
US Forces Soon to Leave Region
TEHRAN (Defapress) - Commander of the Quds Force of the Islamic Revolution Guards Corps Brigadier General Esmayeel Qaani lauded the role of Martyr Lieutenant General Qassem Soleimani in strengthening the Axis of Resistance, and vowed that the US troops will soon leave the region.
News ID: 82829 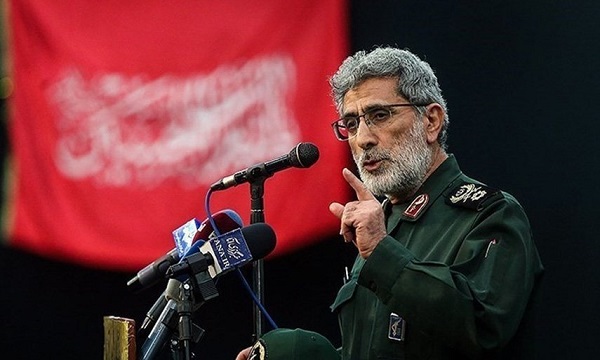 Qaani praised the role of General Soleimani in resolving regional crises and strengthening the Resistance Front, stressing that according to the agenda of the Resistance Axis, the end of the US military presence in the region is imminent.

He made the remarks in a closed session of the Iranian Parliament on Wednesday, where he briefed the lawmakers on the details of the last year terror attack on his former boss, Martyr General Soleimani.

“Naturally, the issue of harsh revenge is seriously on the agenda of the Islamic Republic of Iran, and it will be carried out by appropriate means in a proper time, although people have already given perpetrators of the crime several slaps across the face,” Amir Abdollahian said.

He noted that the Iranian Judiciary is also seriously pursuing revenge for the crime, saying that Iran has enlisted the names of 48 individuals as the main perpetrators and masterminds of the assassination of General Soleimani.

Amir Abdollahian vowed that his country would adopt strong measures to put these individuals on trial in the near future.

The airstrike also martyred al-Muhandis. The two were martyred in an American airstrike that targeted their vehicle on the road to the airport.