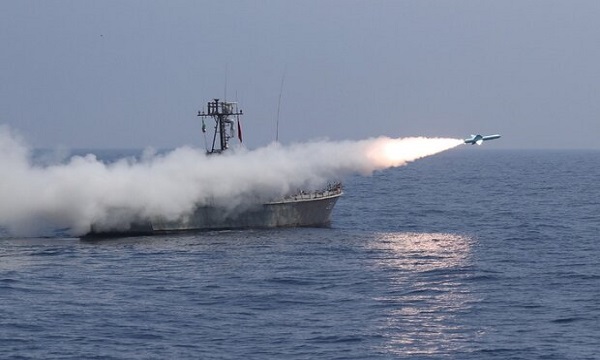 As reported, a variety of long-range cruise missiles successfully hit their targets in the North Indian Ocean and the defined exercise area.

In addition, the Iranian designed class of semi-heavy submarine, Fateh, shot its first-ever torpedo in this drill that successful could hit the target.

Deputy Navy Commander for Coordination Rear Admiral Hamzeh Ali Kaviani referred to the variety of the cruise missiles that Iran has access to and named them effective weaponry on the battlefield.

Emphasizing that information about some of the weapons and systems used in this exercise are classified as confidential, he added that enemies must know that in case of any encroachment on the maritime borders of the Islamic Republic of Iran, they will be targeted by cruise missiles from the coast and sea.

As he added, various types of home-made drones were also used in this drill.

'Eghtedar 99' naval drill kicked off on Wednesday morning in Makran Coast and the northern Indian Ocean.

The exercise has been staged without any previous notice and the participating units were dispatched to the area in a very short time since being notified.