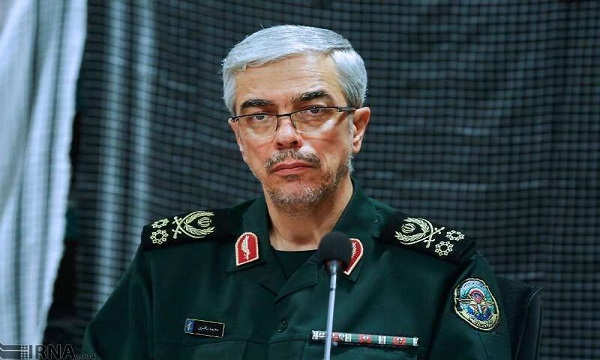 Speaking on the sidelines of the final stage of Payambar-e Azam 15 (The Great Prophet 15) Drill, which kicked off on Fri. at Iran’s Central Desert Area, General Bagheri reiterated that if enemies of the Islamic Republic have malicious intentions towards national interests, maritime trade routes and land and territory of the Islamic Republic of Iran, they will be destroyed by advanced missiles of the country.

The military exercises in the last 15 days and up to the next 5 days, which are carried out in intensive time and almost simultaneously, show the extraordinary and excellent readiness of the Armed Forces in all dimensions of land, air, sea, and air and missile defense, he added.

He pointed to the IRGC’s Payambar-e Azam 15 Drill which was launched with the combined operations and firing missiles in various classes, and emphasized, “Holding large-scale Payambar-e Azam 15 (The Great Prophet 15) Drill shows that the missile power of the Islamic Republic of Iran in short-, medium-, and long-range is ready to defend the land and territory, national interests and sublime objectives of the Islamic Republic of Iran with all its might.”

The large-scale Parambar-e Azam Drill demonstrated the defense power of the Islamic Republic of Iran in protecting its national interests, he said and emphasized, "Although we do not intend to carry out any aggression, we declare with these military exercises that if enemies have any ill intention towards our country, they will be attacked with Iran’s missile power in the shortest time possible.”