Gen. Salami:
Enemy plots to overthrow Islamic Republic 'shattered'
TEHRAN (Defapress) - Saying that the Iranian nation has passed through difficulties and dangerous phrases, IRGC Chief Commander said, "The enemies sought to overthrow the Islamic Republic, however, they were defeated by Iran on all fronts."
News ID: 82972 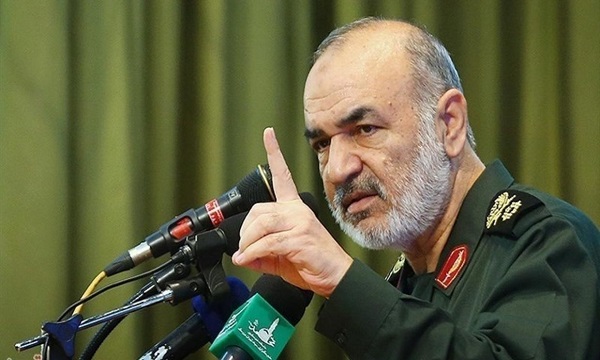 Speaking in a local ceremony, Major General Hossein Salami spoke about the current status of the Islamic Revolution at the international level.

Saying that passing through difficulties during the 42 years was like crossing the Nile, he maintained, “We have passed through all the difficulties and dangerous phrases caused by the enemy who seeks to overthrow the Islamic Republic.”

Today the US has become isolated and ineffective and it has lost its role and power at the international level, Salami said.

“However, the United States has been failed by weak rulers, as well as a lack of wisdom; This is not my word, but the confession of the Americans themselves”, he added.

Referring to the hostile moves of the enemies against the Islamic Revolution during the past 42 years, he said, “The enemies resorted to many tools in the fields of economics, culture, politics, social affairs, and media, however, under wise guidelines of leader, they failed on all fronts.”