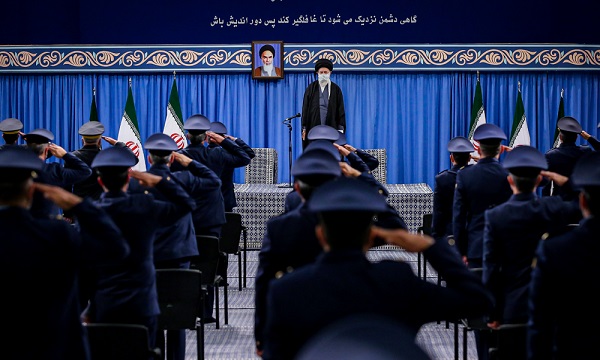 The side that is entitled to set conditions for the JCPOA is Iran because it fulfilled all the commitments and not America and three European countries that violated all their commitments, the Leader said on Sunday in a meeting with Iranian Air Force commanders and personnel.

If they want Iran to return to its commitments, America should first revoke all the sanctions and then we will do verification and if the measure was valid, we then will return to our commitments, he added.

This is a definitive policy of the Islamic Republic that all officials agree on, stressed Ayatollah Khamenei, adding that Tehran will not abandon this approach.

Washington pulled out the UN-endorsed JCPOA in 2018 and reimposed severe sanctions on Iran's economy through a policy dubbed 'maximum pressure' to force Tehran into a 'better' deal. After a year of patience, Iran started to reduce commitments to the deal according to the text of the JCPOA and to create a balance, asking other parties to shield its economy from unilateral US sanctions. Tehran says all its nuclear measures are reversible as soon as other parties fulfill their part of the commitments under the deal, one of which is normalizing trade and banking ties with the Islamic Republic. Meanwhile, the new US administration has made contradictory remarks over returning to the deal. Some American officials have set conditions such as negotiating on Iran’s missile program while some reports indicate that Washington intends to return to the deal without lifting sanctions.

"The US miscalculated in understanding the Iranian nation during the 1979 Revolution, and so they failed. During the 2009 sedition, the Democratic president backed the sedition. Trump failed in his Maximum Pressure Policy too. They're still miscalculating," said Ayatollah Khamenei according to his official press service.

"One should know the US properly. Their recent events were a fiasco. Trump’s fall wasn't just the fall of an unfit president. It was the decline of US power and social order. Speaking of US’s decline from within and the start of a post-US era are the words of US experts, not ours," said Ayatollah Khamenei, adding, "The US is truly declining, and this has distressed and stunned some of their allies in the region. The Zionist officials’ nonsense stems from their fear of the US domestic situation and they've realized this well. The world is watching US power decline internally and internationally."

"Some regimes' biggest mistake is that they want the US to bring them national security. They spend billions of dollars, are humiliated and in the end the US doesn't give them security when needed. Examples are what happened to US allies in Egypt, Tunisia, and Pahlavi in Iran."

Imam Khamenei invited those who have unrealistic estimations of US power and that of some other countries to look at recent events in the US. He explained, “The scandalous events that have taken place in the US recently are not minor events, and they should not be considered to be the mere downfall of an incompetent President. Rather, they are a manifestation of the decline of the US reputation, power and social system.”

Referring to statements made by some eminent political personalities in the US, the Leader of the Islamic Revolution said, “They themselves state that the social system of the US has deteriorated from within, and some have even spoken of a post-US era.”

His Eminence added, “If something similar to what occurred in the US had occurred in any other part of the world – particularly in countries with which the US is at odds – they would not have stopped covering it in their news, but the mass media empire is in their control. So they try to show that the conflict has finished, but it is far from over.”

The Commander-in-Chief of the Iranian Armed Forces stated that the reason why some regimes that are dependent on the US – in particular, the Zionist regime – are distressed and stunned and the reason for their recent ranting and raving is their fear and anxiety about the reality of the US decline in international and domestic areas.

Stating that one of the ways for increasing a country’s power is to strengthen the Armed Forces in proportion with regional and international events, Imam Khamenei praised recent military maneuvers and said, “Carrying out such great, impressive maneuvers, despite the existence of sanctions, gives us confidence that national security has been ensured by the children of the country who are in the Armed Forces. This is truly a source of pride.”

This is an annual meeting held on 19 Bahman, which fell on Feb. 7 this year, and marks the anniversary of the day when Air force commanders and personnel met with the founder of Islamic Revolution Ayatollah Khomeini on Feb. 8, 1979, to express allegiance with the Islamic Revolution. This year’s meeting with the Leader of the Islamic Revolution is being held under health protocols and with a limited number of attendees compared to previous years’ meetings.