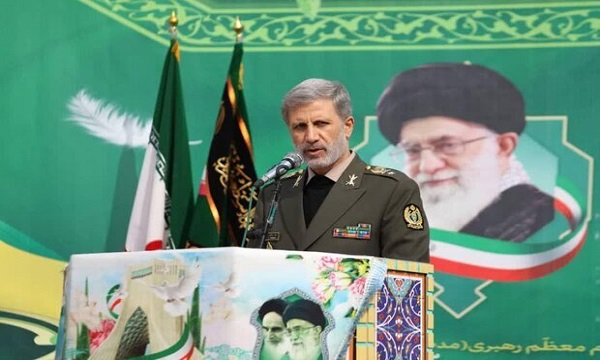 Speaking on the occasion of 42nd victory anniversary of the Islamic Revolution among personnel and staff of the Ministry of Defense on Tue. which was held with fully observing of health protocols and guidelines due to the spread of coronavirus, COVID-19, Brigadier General Amir Hatami commemorated the name and memory of all martyrs who sacrificed their lives for independence and security of the country especially former IRGC’s Quds Force Commander Martyr Lt. Gen. Qassem Soleimani and prominent Iranian nuclear scientist Martyr Mohsen Fakhrizadeh.

The Islamic Revolution has determined its path correctly and accurately, he said, adding, “Independence is the great ideal of the noble nation of Islamic Iran and we must stand and resist against enemies of the country for fully materializing it.”

Elsewhere in his remarks, the defense minister added that East and West blocs were united with each other during the eight years of the Sacred Defense (Iraqi imposed war against Iran in 1980-1988) while people of the country resisted firmly against the global arrogance with all their might and power.