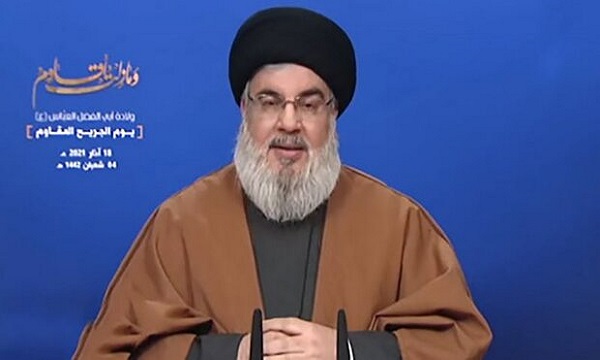 “We have information that some foreign powers are attempting to drive Lebanon into civil war,” Nasrallah said in a live address via Al-Manar on Thursday night, on occasion of Hezbollah’s Wounded Fighter Day, which coincides with the birth anniversary of Al-Abbas – the brother of Imam Hossein (PBUH), who was martyred in the Battle of Karbala.

Nasrallah first congratulated all Muslims on birth anniversary of Imam Hussein, Al-Abbas, Imam Zein Al-Abideen, and Imam Al-Mahdi (Peace be upon them) in the holy month of Sha’ban.

The Hezbollah chief noted that the Lebanese resistance movement “chose the birth anniversary of Al-Abbas (a.s.) to mark the Wounded Fighter Day since this figure insisted to stay fighting beside Imam Hossein (a.s.) despite major injuries he sustained during the battle of Karbala.”

“Al-Abbas (a.s.) had special insight as he stayed loyal to his brother, Imam Hussein (a.s.),” Nasrallah said, adding that “Hezbollah’s wounded fighters have been just like Al-Abbas (a.s.), despite their injuries and all forms of difficulties, they insisted to stay on path of Jihad.”

The Hezbollah chief said that “the crisis in Lebanon has political and economic aspects; it can also be described as a crisis of establishment.”

Calling for responsible and wise action by all, Nasrallah said, “The chaos in Lebanon is aimed at driving Lebanon into a civil war and this is a red line.”

He reiterated, “We have information that some foreign powers are attempting to drive Lebanon into civil war.”

“Some say that Hezbollah is the party which has weapons,” Nasrallah said, adding, “This rhetoric is wrong since the civil war can be erupted by light arms.”

He underlined that “Hezbollah has no intention to resort to his weapons in a bid to form a government or to deal with the economic and financial crisis.”

Nasrallah referred to the economic crisis and said, “The main causes behind the current crisis are the corruption, loans with high interest rate, money laundering, freezing of deposits, Beirut Port blast and many others.”

He also lambasted the US for its interferences and said, “The US has been preventing Lebanon from heading towards China or Russia, Washington has been also blockading Lebanon in a bid to force our country to subdue.”

“The US wants Lebanon to starve and I said it clear before: we won’t starve!”

Nasrallah added, “There have been calls for forming a government of specialists, but I want to ask a question: Can this government bear responsibility of facing political challenges?”

Furthermore, he said, “We in Hezbollah announced that we don’t reject forming a government of specialists, but my advice to form a techno-political government that will be capable of taking national decisions.”

He then called on political parties to invest their economic capabilities in a bid to help the Lebanese people who are suffering poverty.

Lebanon is experiencing its worst economic crisis in decades, compounded by the COVID-19 pandemic. Prices are skyrocketing and more than half of the population is now living below the poverty line.

The Lebanese pound or lira has lost more than 90 percent of its value since the 1975-1990 civil war, plunging to a record low of almost 11,000 pounds to 1 US dollar. The financial crisis has plunged many into poverty and endangered imports as dollars grow scarce.

Since late 2019, the country’s politicians have failed to reach an agreement on a rescue plan to unlock foreign cash which Lebanon desperately needs.