Hezbollah Secretary-General:
Liberation of Quds closer than ever
TEHRAN (Defapress) - Seyyed Hassan Nasrallah, the secretary-general of the Lebanese Hezbollah Resistance Movement, delivered a speech Wed. on the upcoming Quds Day, stressing that liberation of holy Quds is closer than ever.
News ID: 83307 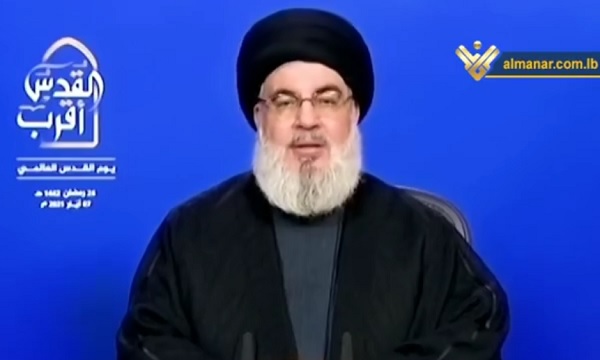 Speaking on the upcoming occasion of International Quds Day, which is coming in two days on Friday, the Secretary-General of Lebanese Hezbollah said that this day was declared by Late Imam Khomeini, the founder of the Islamic Revolution in Iran, and praised him for that.

He said that the Muslims all around the world and the Resistance forces are determined to fulfill their duty towards the holy Quds cause and said that "liberation of holy Quds is closer than ever."

Nasrallah also pointed out that even the elderly and Rabbi in the occupied Palestinian land controlled by Israel are saying that the Israeli regime has no future.

He further said that the Palestinian land is not for sale, for the Zionists and the occupiers.

He also cited the Israeli elderly and Rabbi as saying that "You are going towards the end."

Elsewhere in his remarks, the Hezbollah chief said that the recent normalization deals with some Arabs states cannot save the Zionist entity.

The land of Palestine is not for occupiers and colonial powers, according to Nasrallah.

At the end of his brief speech on Wednesday, Nasrallah also remembered Martyr Qassem Soleimani, the commander of Iran's Quds Forces who was martyred last year by the US forces in Iraq, for the efforts he made during his lifetime in support of the Palestinian and the Resistance forces.