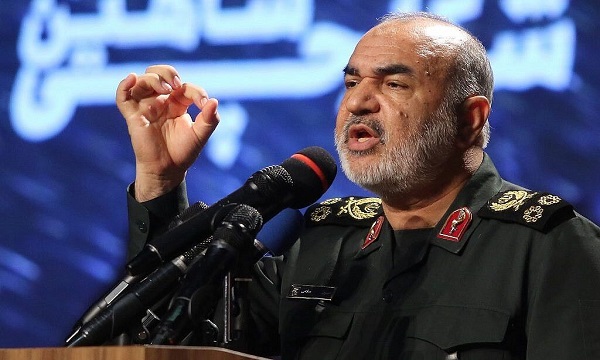 Major General Hossein Salami made the remarks in a massive rally in downtown Tehran on Wednesday which was held to show the people of the Iranian capital's support for the Palestinian people amid ongoing deadly aggression of the Israeli regime on Gaza and the West bank.

"After the sabotage in Natanz, their missile factory was destroyed and the Haifa refinery exploded, and the largest defense complex called Rafael caught fire, and the security of the Zionist regime has suffered an endless defeat," he explained more.

"Zionist missile defense systems have failed in face of resistance forces attacks," the IRGC chief commander said elsewhere in reference to hundreds of rockets that have been fired from Gaza and hit their targets in the occupied territories of Israel since the new escalation began on Monday, May 10.

General Salami added that the zionists find themselves under heavy fire from missile-equipped Palestinians, adding that the Zionist regime of Israel must know that the Palestinian cause will never be forgotten.

"More than two-thirds of Zionist cities were attacked by Palestinian rockets from Gaza, leaving no safe haven for the Zionists," the IRGC chief commander noted, adding "All of the Israeli regime's missile defense systems against thousands of Palestinian missiles failed."

He predicted that the Palestine flag will be hoisted in Europe and the American lands one day.

Elsewhere, General Salami pointed to the resistance forces' advances in Yemen, saying "If we look at Yemen, we see good victories," adding that Yemen is "a reflection of any place where the United States wants to operate."