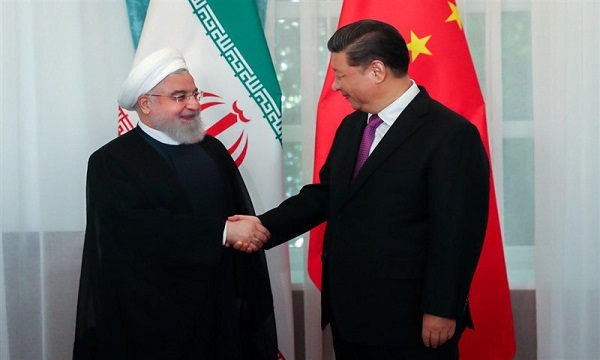 In a phone talk held with Chinese President Xi Jinping on Monday, Iranian President Hassan Rouhani pointed to the strategic position and long-term vision of the Islamic Republic of Iran to strengthen the comprehensive partnership with China as one of the world powers independent of international developments, stressing the need to accelerate the implementation of the provisions of the agreements between the two countries.

Referring to the growing Tehran-Beijing relations over the past 50 years and welcoming the signing of a comprehensive Iran-China cooperation program for the future, he called the relations between the two countries strategic.

Rouhani also expressed hope that these bilateral and regional relations and cooperation will be further developed in all fields.

Iranian President voiced Iran's readiness to promote joint economic cooperation with China in the West Asian region, saying that the development of cooperation will strengthen the relations between the two countries, especially in the economic and trade fields, including increasing Iran's oil and non-oil exports to China and facilitating the presence of Chinese companies in Iran in areas of interest.

"Iran is ready to cooperate with China on enhancing cooperation with the West Asian region on various issues, including resolving the Palestinian issue, and in this regard, the "Hurmoz Peace Endeavour (HOPE) plan can be the basis for interaction between the two sides," Rouhani noted.

Appreciating China's principled position and support for the JCPOA, including in the recent Vienna talks, Rouhani stressed the need for close cooperation between the two countries on international issues to counter the Cold War and the US-Western alliance against independent countries, including Iran and China.

Xi Jinping, for his part, called the relations with Iran strategic and developing in all fields and stressed the need to implement and operationalize the agreements between the two countries as soon as possible.

Referring to the regional cooperation between the two countries, he stressed that Iran and China can play an effective role in solving regional and international problems by sharing their positions.