Trans-regional vessels should leave Persian Gulf
TEHRAN (Defapress) - Stating that there is no reason for the existence of foreign forces in the Persian Gulf, Iran’s Navy Commander said that the presence of US and EU vessels near our shores should be suspended.
News ID: 83523 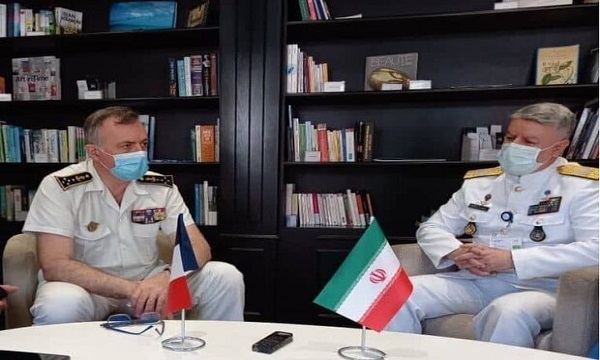 Rear Admiral Hossein Khanzadi made the remarks on the sidelines of the Seventh Indian Ocean Naval Symposium (IONS) in his meeting with Pierre Vandier, the Chief of Staff of the French Navy.

Referring to the geostrategic position of Iran in the region, Khanzadi said, "The Islamic Republic of Iran is located in a special position in the northern region of the Indian Ocean, and many geopolitical experts refer to Iran as the heart of the earth."

"One of the reasons for this is the very good passage capacity, energy and also the existence of very important straits in this area," he added.

"While the Persian Gulf and the Sea of Oman is a safe and stable region, in recent years we have witnessed a lot of insecurity in the Gulf of Aden and the Bab al-Mandab Strait," he noted, adding, "For this reason, we do not understand the existence of coalition forces in the Persian Gulf region, and we believe that the main reason for this presence is that the dialogue between the effective navies has diminished."

Stating that Iran is closely following the moves of the coalition forces, Khanzadi said, "Today, a number of American and European vessels, as well as France, are present in the Persian Gulf region, but we monitor all their moves and vessels."

Iran’s Navy Commander emphasized that the security of the maritime areas of any geography should be provided by the countries of that region.

He also highlighted that these undesirable security combinations [coalition forces] do not enhance collective security and should be suspended.

Pierre Vandier, for his part, pointed to the performance of the Islamic Republic of Iran during the presidency of the IONS, saying, "Despite the coronavirus pandemic, the Iranian navy was able to successfully manage the summit for three years."

During Trump's presidency, when he was very sensitive about Iran's nuclear program, the Americans stepped up military pressure and invited all their allies to the region to increase pressure on Iran, but the French navy backed down slightly from the US stance, he added.

Of course, European countries should have been present in the Persian Gulf to ensure the security of the region but France was not present in any of the American operations, Vandier noted.

Stating that Denmark and the Netherlands participated in US naval operations, he added that this cooperation has also been to help reduce tensions and pressures.

"France and European countries are seeking peace in the region. Of course, the French navy, with the help of the Ministry of Foreign Affairs, is helping to reduce tensions in Yemen and the Persian Gulf, and we wish that peace and friendship return to the world and that all countries have this mutual understanding," Vandier added. "This meeting was very important to me, and from now on, the relationship between the navies of the two countries should be increased in order to help reduce tensions in the region."

Upon his arrival at Réunion, Rear Admiral Khanzadi was officially welcomed and honored by Pierre Vandier, the Chief of Staff of the French Navy.