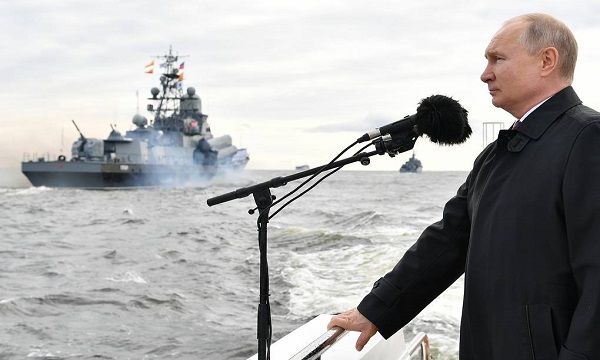 Russian President Vladimir Putin made the remarks ahead of the beginning of the Main Naval Parade on Sunday, TASS reported.

"Russia has taken a worthy place among the leading naval powers within the shortest time possible, passed a colossal way of its development from a modest small boat of Peter the Great to powerful ocean-going naval ships and nuclear-powered underwater missile-carrying cruisers, created effective long-and short-range naval aviation, reliable coastal defense systems and the latest hypersonic precision weapons unrivalled in the world, which we are improving constantly and successfully," the Russian president said.

Today the Russian Navy has all the necessary potential for the reliable protection of the Motherland and Russia’s national interests, Putin stressed.

"We are capable of detecting any surface, underwater, and aerial enemy and deliver an inevitable strike, if necessary," the Russian president assured.